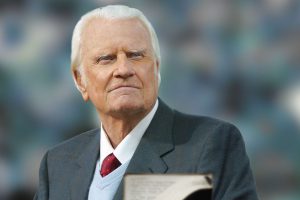 Children tell God what they are genuinely thinking. They are honest, simple, and direct. They understand that God is listening, and they understand that prayers are very important. Somehow when we become adults, we forget how important praying is. So if you and I are going to be like little children, we must not forget our prayers.

Billy Graham came to Sacramento, the capital of California, [in 1996] to hold his crusade at the Arco Arena, just north of downtown. The night before the crusade was to begin, choir rehearsal went late. One of the members of the choir was driving home through downtown when he noticed a man slumped over on the steps of the capitol building. It was cold outside, almost midnight, and not the safest of places to be. The choir member decided he could not ignore the plight of this poor, homeless man. He was nervous as he approached the man, not knowing what to expect. The homeless man was crouched almost cocoonlike on the steps, and the choir member reached out and gently touched his shoulder.

“Sir, can I help you?” he said. “Are you okay?” The man looked up. It was Billy Graham. He was praying for the city of Sacramento.

Billy Graham is famous. He has people all over the world praying for him and his crusades, but he still knows where the power of his crusades comes from: his moments praying with his Savior. In this day of TV evangelists with their flashy clothes, sophisticated fund-raising, limos, gold necklaces, and Lear jets, it’s nice to know that one evangelist still trusts the silent, unflashy power of prayer. Billy Graham has not forgotten to say his prayers. And neither should we.

Content taken from Dangerous Wonder: The Adventure of Childlike Faith by Michael Yaconelli, © 1998. United by permission of NavPress. All rights reserved. Represented by Tyndale House Publishers, Inc. To order the book, click HERE.