Members of the newest United Methodist congregation in Dubai, Oasis of Grace, meet for worship in a hotel room on Friday afternoons. Photo courtesy of Thomas Kemper and the General Board of Global Ministries.

Witness to faith in Jesus Christ takes many forms and can be found in unexpected places — such as the United Arab Emirates (UAE), where Oasis of Grace United Methodist Church is one of the newest congregations in our denominational connection. The vital and vibrant church meets in a hotel in the officially Muslim country; it is an expression of the devotion of United Methodist migrant workers from the Philippines.

I was honored to worship there and take part in the installation of its first leadership team late during the Lenten season this year. I was in the UAE for the tenth anniversary of the First United Methodist Church in Dubai and to show that Global Ministries is walking with United Methodists and other Christians there. Oasis of Grace, launched last November, has a congregation of approximately 50 people.

First Church Dubai, Oasis of Grace, and a third congregation I had the chance to visit, Sharjah United Methodist Church, were started by Filipino United Methodists who come in large numbers to work in the prosperous, oil-rich kingdoms along the Persian Gulf. They bring the church with them and are allowed—in the UAE—to gather for worship, although Emirati Muslims are not allowed to come to the services or convert to Christianity. Another United Methodist community, which I was unable to visit, has been organized by migrant church members from Zimbabwe.

Though often facing peril, migrants have long played a positive role in the spread of the gospel of Jesus Christ — to the “ends of the earth,” as Acts 1 states. They are a blessing to God’s mission. This is true today not only with respect to those from the Philippines in the Middle East but also with United Methodist migrants from Africa reaching Europe and North America.

To a large degree, Methodism is and always has been a migrant movement, and missionaries from New Testament days have crossed tremendous boundaries to share the good news.

The Migrant Church in the UAE. The UAE is a federation of seven absolute Islamic monarchies. Only about 15 percent of the total population of nine million is comprised of indigenous Emirati citizens, who are required to profess Islam. With some 85 percent of the people being migrant workers, concessions to other religious groups are imperative. The constitution allows limited free expression of religion to immigrants. Of the total population, some 27 percent are Hindu, mostly from India; Christians about 10 percent, mostly from various parts of Asia.

The two things that most inspired me about my visits with the Filipino United Methodists in the UAE were their powerful sense of community and their dependence on lay leadership. The United Methodist community is family. The First Church anniversary service bulletin spelled it out: “Praising, worshipping, and serving as United Methodist family.” Children are plentiful in the congregations. In true Methodist fashion, serving is important. The “family” has outreach to residents of huge labor camps outside of town, offering legal advice to other migrants and helping those who might be mistreated by employers to find redress.

Most congregations are led by lay pastors who also have regular jobs. The pastor of Sharjah church is an auto mechanic. Oasis of Grace is led by a sales executive. The Filipino churches in the UAE are under the jurisdiction of the episcopal area of Manila. I joined Bishop Ciriaco Francisco on the visit, along with the Rev. Rico Esguerra, superintendent of the Manila District whose territory also includes the UAE where he visits on a regular basis.

My brief trip to the UAE included “Palm Friday.” Sunday is just another work day. All worship is on Friday, the weekly holy day of Islam — and whether Protestant services can be on Friday depends on whether a congregation can find a space for worship. First Church’s anniversary service was on a Friday afternoon at the Anglican Holy Trinity Church. I met with Oasis of Grace in the middle of the day at the Cassells Hotel, Al Barsha, and the Sharjah church in the evening at St. Martin’s Anglican.

No Permanent Sanctuaries. First Methodist Church Dubai has worshipped in many spaces throughout its ten years. While some religious groups have regular churches or temples, that is generally not the case with small Protestant fellowships such as United Methodists. Our congregations borrow or rent space, First Church currently at Holy Trinity Anglican parish and Sharjah at St. Martin’s. Both Anglican churches are part of the Diocese of Cyprus and the Gulf. The Anglican Church has a strong presence in the UAE stemming from British economic interests in the late nineteenth and early twentieth centuries.

St. Martin’s is a particularly interesting case study in broad ecumenical space-sharing. The Rev. Drew Wayne, the priest in charge of the 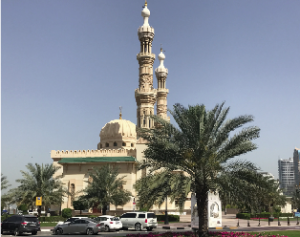 Anglican facility, told me that 127 different guest congregations use the center, which has rooms that can accommodate from 50 to 1,000 persons and was enlarged in 2013 to accommodate a growing number of groups. Father Wayne said that the ruling emir told him to “facilitate Christian services,” and he took the mandate seriously. The Anglicans provide only a sound system and a podium. Sharjah United Methodist Church brings and takes away after worship its Christian symbols and equipment. There is no storage area.

Health Concerns. Dubai, one of the best known of the emirates, is a futuristic city with amazing architecture, including the world’s tallest building, a kind of modern wonderland. The UAE, despite human rights and equity issues arising from its mixture of religious and secular law, puts a high priority on health services. It has a privatized, yet universal, health insurance system. Health care is free for citizens and insurance is a shared expense for migrant employers and employees. All migrants must be part of the system.

The emirates have reached out to health care providers from outside the country. The outpatient Valiant Clinic, opened in Dubai last year, is administered by Houston Methodist Hospital. Along with local United Methodist leaders, I visited the state-of-the-art clinic on City Walk while there, as it seems one of the very few places where the word Methodist is publicly displayed. We received a warm welcome, and yes, the Methodist connection is alive and vibrant and in sometimes very unexpected places.

Thomas Kemper is general secretary of the General Board of Global Ministries. Reprinted by permission.