Rob Bell is one of the most innovative and effective communicators in Western Christianity. His work on the NOOMA videos, the rapid growth of Mars Hill Church, and the popularity of his books all demonstrate his ability to convey complex ideas in accessible ways. Bell writes in a conversational style that draws the reader into the world of creative ideas he inhabits. He is a grammarian’s nightmare, but in an age in which popular writing is more beholden to the blogosphere than to Turabian, Bell has been able to speak to people who will never darken the door of a theological library.

His newest offering is ambitiously titled, What is the Bible? How an Ancient Library of Poems, Letters, and Stories Can Transform the Way You Think and Feel About Everything. The book comprises four main sections, the first three of which consist mostly of his own interpretations of biblical texts. In the fourth section, he attempts to answer some key interpretive questions about issues such as the violence in Scripture, the inspiration of Scripture, and its authority. A brief fifth section includes annotated endnotes.

Bell’s best moments in this book occur in the first three sections during his sermonic interpretations of Scripture. He knows the content of the Bible well. One could argue with some of his historical assertions and the conclusions he draws from them, but he has done his homework. He understands the value of historical and literary exegesis, but he never allows the technical work that supports his reading to overshadow his intent to communicate accessibly and clearly. At times he works theologically with Scripture in ways that are eye-opening, surprising, and provocative.

Despite these high moments, the book is marked by serious theological and interpretive problems. Perhaps the most significant of these is his attempt to disconnect the Bible from the Church. He states in the introduction that “the Bible isn’t a Christian book.” Rather, it is “a book about what it means to be human.” He fleshes out this understanding of the Bible throughout much of what follows.

Yes, the Bible is, at least in part, about what it means to be human. To assert that the Bible is not a Christian book, however, is simply wrong. If one means the Old and New Testaments together, the Bible is very much a Christian book. The Old Testament was adopted in its Greek form by the early church. The New Testament was written by some of the earliest followers of Jesus, drawing upon ideas developed in early Christian communities. The selection of books that would become the Christian canon took place within churches. These books were selected, at least in part, because of their usefulness in teaching the faith of the Church. It is the Church that has preserved and proclaimed the Bible over the long history of our faith. By any reasonable definition, historical or theological, the Bible is a Christian book. Why, then, would Bell claim otherwise?

To answer this question, we need to unpack his notion of divine revelation. “So is the Bible the word of God?” he asks. “Yes. Lots of things are,” including “the heavens and the stars” as well as “the mouth of a baby,” “your conscience,” and “poets and philosophers.” Here Bell draws on the biblical tradition that God can be known from creation. “The heavens proclaim the glory of God; the skies proclaim the work of his hands,” says the psalmist (19:1).

Does creation, however, make God known to us in the same way that the Bible does? It is useful here to recall the distinction between general and special revelation. Bell strongly emphasizes general revelation — what we can discern about God and our lives from observing the world around us. For example, we might look upon the beauty and order of the world and derive from these that there is a God, a good God who values order rather than chaos.

What we can’t derive from observations like these, though, are truths such as that God so loved the world that he gave his only Son, that anyone who believes in him will not perish but have eternal life (John 3:16). We could not derive the election of Israel, the necessity of Christ’s atoning work on the cross, or the resurrection of the dead. These require special revelation, the kind we find in the Bible. So, yes, stars and babies and our consciences do in fact testify to us about God, but not in the same way as the Bible does. General revelation can only take us so far. We need special revelation to get to the core claims of Christian faith. If Bell does see special revelation at work in the Bible, he makes little mention of it.

Because Bell largely ignores special revelation, there is no sense that the Bible teaches the “faith once and for all delivered to the saints” 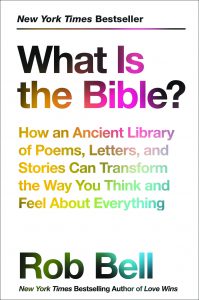 (Jude 3). Rather, its purpose is to teach us universal truths about the nature of human existence. Take, for example, his summary of Paul’s message: “The apostle Paul is stoking a movement, spreading this intoxicating message that there’s another way to be in the world, that the good news of Jesus is about human dignity and goodness.” How he determines this to be Paul’s central message is a mystery. Much more prominent in Paul’s writings are themes of human sinfulness, the salvation available to us through Christ’s death on the cross, and our resurrection from the dead, of which Christ is the firstfruits. Bell criticizes readers of the Bible who are “constantly comparing what they’re reading to what they have already decided about who God is and what God is like.” In this case, one might respond with the old proverb, “Physician, heal thyself.”

Bell repeatedly asserts that the Bible is a “progressive” book that teaches us about the universal nature of human existence. Chapter 30 asks the question, “Why is Leviticus in the Bible?” Rather than answering this question theologically or even historically, Bell reaches for psychology. The offerings and rituals required in Leviticus helped people relate to God, he asserts. They helped them feel at peace with God, to know where they stood. All the “endless details” in Leviticus had “a significant calming effect, reassuring you that you’re doing it correctly and not bringing unnecessary judgment on yourself.” Leviticus, he explains, is a step on the way to a better understanding of the relationship between God and humankind. “It was a revolutionary step forward in human consciousness at that time, inviting people to consider a whole new conception of the divine.” Later in the book, he applies these ideas to the death of Jesus: “God didn’t set up the sacrificial system. People did.” He continues, “The sacrificial system evolved as humans developed rituals and rites to help them deal with their guilt and fear. (This is why the book Leviticus is so radical and progressive — in it you can actually know where you stand with God, you can have peace with God, a truly revolutionary idea at the time).” And just like that, the entire Israelite sacrificial system, the significance of the temple, the priesthood, and Christian atonement vanish in a flash of stunning reductionism. One wonders why the rest of the Bible should not suffer the same fate.

In fact, it does. “When you read the Bible in its context,” he writes, “you learn that it’s a library of radically progressive books, calling humanity forward into a better future.” Particularly in the fourth section of the book, it becomes clear that Bell is deeply beholden to the liberal doctrine of progress: we as human beings are getting better and better as time goes on. We are progressing in terms of scientific knowledge, our understanding of human nature, and our views of right and wrong. The Bible is valuable because it testifies to this progress. It demonstrates the moral and spiritual development of the people of Israel and the first followers of Jesus as they came to apprehend the universal truths available all around them. As Bell puts it, “The Bible is a reflection of a growing and expanding human consciousness.”

He repeatedly exhorts readers to wrestle with the text, sit with its ambiguity, and let it speak to them afresh. “I want you to read the Bible in a whole new way,” he writes. Ironically, he has very little new to offer in this book. His interpretive strategies are simply rehashings of various currents of liberal Protestantism. Scripture teaches us timeless truths. The Bible is inspired, but only in the same way that you or I might be inspired. The authority of Scripture is only as great as we allow it to be. The Bible is a human book. Atonement is a human invention. For those of us in the so-called “mainline” traditions, these kinds of assertions are old hat. Another book reasserting them, no matter how interesting the prose or creative the presentation, is of little use.

David F. Watson is the academic dean at United Theological Seminary in Dayton, Ohio. He is the author, most recently, of Scripture and the Life of God: Reading the Bible to Grow in Faith (Seedbed).