Heroes and Heroines of Our Faith 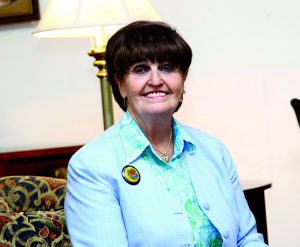 More than 250 million Christians are suffering persecution of some kind around the world today, according to Baroness Caroline Cox, founder of the U.K.-based Humanitarian Aid Relief Trust (HART). Many live under the oppression of Communism, fundamentalist Hinduism, political Buddhism, and, above all, militant Islam.

Cox, a member of the British House of Lords and former Deputy Speaker, spoke June 30 before 1,400 clergy, bishops, and lay delegates at the Provincial Assembly of the Anglican Church in North America held on the campus of Wheaton College in Illinois. Quoting Saint Paul in his first letter to the Corinthians, Cox said, “When one part of the Body of Christ suffers, we all suffer.” She continued, “We do have a mandate to be alongside those brothers and sisters… If not necessarily in person, then certainly in spirit and prayer.”

Cox relayed the words of a woman whose child was dying of starvation in Sudan: “I could go to a government-held area, get some food and medicine, and save my little boy, but I am a Christian. I’m not going to convert to Islam. We will live and die as Christians.” Cox assessed: “To sacrifice yourself must be tough. To sacrifice your child – I am blessed with 10 grandchildren – I can hardly imagine sacrificing a child for my faith. That is the price of faith for so many of our brothers and sisters.”

Speaking of Nigeria, Cox reported that over recent decades, thousands of Christians have been killed and hundreds of churches burnt. Many Muslims have also died at the hands of Boko Haram. “The escalation of Boko Haram’s brazenness is creating a reign of terror and intimidation in northern Nigeria,” Cox explained. Showing footage of devastated church buildings, she described the Boko Haram tactic of suicide bombers driving explosive-laden vehicles into the middle of church services. “But even there, in the middle of that destitution – of that horrendous destruction – people still praise God,” Cox reported, showing the words “To God be the Glory” etched on the wall of a destroyed church building. “The very stones cry out under persecution, but they cry out with worship,” Cox said. “We never hear a message of revenge, hate, or bitterness.”

Quoting Archbishop Benjamin Kwashi of Jos, Nigeria, Cox read: “If we have a faith worth living for, it is a faith worth dying for. Don’t you compromise the faith that we are living and dying for.”

In another presentation at the event, Bishop Grant LeMarquand of the Horn of Africa spoke alongside his wife Wendy about their ministry among refugees in Gambella, Ethiopia, near the border of South Sudan. Addressing the “global crisis” of 65 million refugees, the LeMarquands told of 350,000 refugees from South Sudan in their own area and the losses they had experienced.

“Bullets came, we ran, we carried only our children,” Dr. Wendy LeMarquand relayed of a story from one group of refugees that arrived from South Sudan. While they had no food or clothes, the refugees were most sad about losing their elderly. “The blood of Abel cries for vengeance, the blood of Jesus cries for forgiveness,” Bishop LeMarquand explained of the unique message the Gospel brought to people hurting amidst ethnic strife.

Jeff Walton is Communications Manager for the Institute on Religion & Democracy and staffer on the Anglican Action program. Reprinted by permission.