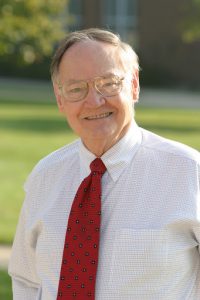 Dr. Kenneth Kinghorn, Professor of Church History and Historical Theology and Academic Vice President at Asbury Theological Seminary, died on the morning of Sunday, July 23, 2017. He was a treasured friend to members of the staff while our offices were located in Wilmore, Kentucky. We extend our condolences to the Kinghorn family. We repost one of his articles to mark his passing. – Good News

John Wesley invented no new theological doctrines. “Whatever doctrine is new must be wrong,” he wrote, “and no doctrine can be right, unless it is the very same ‘which was from the beginning.’” Mr. Wesley said, “If Methodism…be a new discovery in religion…this [notion] is a grievous mistake; we pretend no such thing.” Far from being narrowly sectarian, John Wesley was a catholic Christian. He stood firmly in the mainstream of historic Christianity, and drew from many of the tributaries that fed into it.

1. Early Church Writers. John Wesley often referred to “Primitive Christianity,” that is, the Church from the end of the apostolic age to the early fourth century. Christian writers in this era helped confirm the biblical canon, the doctrine of the Trinity, and the mystery of the Incarnation, through which the eternal Christ entered time and space as fully human and fully God. Mr. Wesley said of those early, “primitive” Christians, “I reverence their writings, because they describe true, genuine Christianity….They never relinquish this: ‘What the Scripture promises, I enjoy. That the God of power and love may make you, and me, such Christians as those Fathers were, is [my] earnest prayer.’”

2. The Protestant Reformation. John Wesley was a Protestant, who believed the Medieval Church had allowed layers of nonbiblical tradition to cloud the gospel of grace. Accumulated ecclesiastical inventions compelled the sixteenth-century Reformation. The Wesleyan message harmonizes with the fundamental themes of the Protestant Reformers, who recovered the supremacy of Scripture above human conventions. The essence of Protestantism is that salvation comes through grace alone, faith alone, and Christ alone. Wesley wrote, “We have all reason to expect…that [Christ] should come unto us quickly, and remove our candlestick out of its place, except we repent and…unless we return to the principles of the Reformation, the truth and simplicity of the gospel.”

3. Pietism. The Wesleyan tradition also borrows from the seventeenth-century German Pietists. Those earnest Christians championed the individual’s personal knowledge of Christ, serious discipleship, Christian witness, missions, and social ministries. Wesley referred to the Pietist August Francke as one “whose name is indeed as precious ointment. O may I follow him, as he did Christ!” From the Moravian Pietists, the early Wesleyan movement appropriated such means of grace as class meetings, conferences, vigils, and Love-feasts.

4. The Mystics. The influence of certain aspects of mysticism further reveals the catholicity of the Wesleyan message. John Wesley’s reading of Thomas à Kempis led him first to see that “true religion was seated in the heart, and that God’s law extended to all our thoughts as well as our words and actions.” Jeremy Taylor’s Rule and Exercises of Holy Living (1650) and Rule and Exercises of Holy Dying (1651) and William Law’s Serious Call to a Devout and Holy Life (1728) convinced Wesley of “the exceeding height and depth and breadth of…God.” The mystics also helped Wesley understand the Christian’s privilege of knowing the inner witness of the Holy Spirit. He wrote, “The light flowed in so mightily upon my soul, that everything appeared in a new view….I was persuaded that I should be accepted of Him, and that I was even then in a state of salvation.”

5. The Puritans. The Wesleyan message also bears the influence of the Puritan divines, such as John Owen, Thomas Goodwin, and Richard Baxter. These prodigious writers highlighted the profound depths of grace, God’s call to purity, and living daily in the light of eternity. “Their judgment is generally deep and strong,” said John Wesley, “their sentiments just and clear, and their tracts on every head full and comprehensive, exhausting the subjects on which they write…. They are men mighty in the Scriptures, equal to any of those who went before them, and far superior to most that have followed them.”

The sources and treasures of the Wesleyan message have never been more relevant than today.

Kenneth C. Kinghorn taught Methodist history for more than 43 years at Asbury Theological Seminary in Wilmore, Kentucky. He died on July 23, 2017. He is the author of many books including The Heritage of American Methodism and the three volume set of John Wesley’s Standard Sermons in Modern English. This article originally appeared in the January/February 2010 issue of Good News.