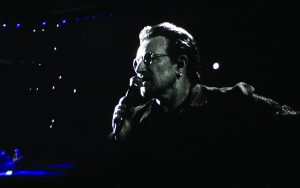 Thirty years ago, I drove 500 miles with college buddies to see U2’s “Joshua Tree” tour stop in Houston. “I can’t change the world / But I can change the world in me,” Bono had sung on a previous album. Young and idealistic, I believed it then. Strangely, I still believe it today. I’ve never forgotten that night – nor the long drive back to get to class the next day. U2 was recently back in Houston to mark the anniversary of the album that arguably handed them the keys to the kingdom of global rock stardom – #1 album in 23 countries. I’ve written extensively about these Irishmen over the last 20 years, but this full-circle “Joshua Tree” tour still triggered moments of emotional daggers-through-the-heart, tribal fist pumps, and Pentecostal hanky waving – transcendence.

The album concept was titled after a prickly and ungainly desert tree named Joshua by settlers because it resembled the Old Testament prophet’s out-stretched arms toward the heavens and deep roots – strangely symbolic for an Irish band from a country divided with sectarian barbwire and religio-political quagmires. Raised by a Protestant mother and a Catholic father, Bono lived the brutal divide. With the loss of his mother at age 14, he grew up under the weight and anguish of tragedy. Then there was the whirlwind of a charismatic revival among some of the bandmates and the stirring of a struggle between rock ‘n’ roll’s narcissism and an unseen kingdom where the first shall be last and the backstage passes are given to those who honor humility as a prime virtue.

Through all this, Bono remains rock ‘n’ roll’s most effective spiritual provocateur. He sees every stage as a pulpit and every coliseum as a cathedral. He talks breezily about the theological superiority of grace over karma to jaundiced rock journalists, launched the humanitarian One Campaign (one.org), and recently wrote the forward to the Bible paraphrase The Message. “My religion could not be fiction but it had to transcend facts,” Bono wrote in a forward to the Psalms in 1999. “It could be mystical, but not mythical and definitely not ritual.”

U2 has sold more than 170 million albums, collecting 22 Grammys along the way. This world tour features a stunning visual spectacle with a 200 x 45 foot high-def LED screen choreographing imagery with the music. For me, three vitally essential images stood out. 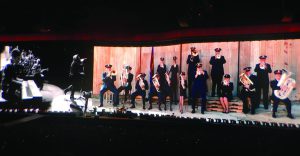 First, a Salvation Army brass band accompanied U2 during the haunting “Red Hill Mining Town.” Never before played live, the song is about the devastation and helplessness of an unemployed miner. “Love, slowly stripped away/ Love, has seen its better day.” The Salvation Army is the most reliable global Christian symbol for faith in action – soup, soap, salvation, and loud music. Under the 150 year old banner of “Blood and Fire,” this ministry – operating in nearly 130 countries – has extended the hand of grace to the down and outers, prostitutes, alcoholics, morphine addicts, unwed mothers, and victims of human trafficking. The original plan was for a brass band to play at every stop on the tour, but the film of them playing in the Santa Clarita Valley of California provides a keen juxtaposition about U2 identifying with the historic message of Salvation Army founders William and Catherine Booth that help is only a drumbeat away (salvationarmyusa.org).

“This was a privilege to be a part of and so much fun to film,” Jacqui Larsson, a member of the ethnically diverse Salvation Army band from Southern California, told me. “It was great to represent The Salvation Army to such a wide audience. We have already heard a few stories of how this video has had a huge impact on people’s lives in a way we had never expected.”

In a long list of poignant moments, the second occurred when we were introduced to Omaima Thaer Hoshan, a 15-year-old Syrian girl in a refugee camp in Jordan. In the midst of the chaos of her circumstances, she voiced her aspirations and hopes for a better tomorrow. A gargantuan banner with her face is passed hand-to-hand throughout the stadium. It’s a not-so-subtle reminder that there is a hellhole on the other side of the globe. At bare minimum, pray for her safety and be grateful you are not where she is. 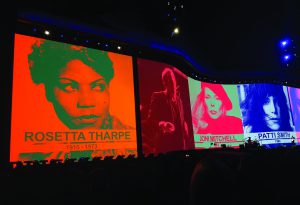 Lastly, during a visual montage of notable female politicians and musicians (Sojourner Truth, Patti Smith, Angela Merkel, etc.), one stood out as a sister-in-arms with U2’s sonic art. Sister Rosetta Tharpe (1915-1973), a personal heroine, was the undisputed queen of rock and gospel music, shredding an electric guitar and boldly taking her sanctified skills and songs outside the four walls of the church – taking church to the people. Keep the faith, she would say to U2, and rock on. Bono has called “I Still Haven’t Found What I’m Looking For” an anthem of both doubt and faith. Whichever side of the coin you’re on, it continues to reverberate in the souls of saints and sinners alike. In the midst of uncertainty, it is anchored in redemption: “You broke the bonds / You loosed the chains / You carried the cross / And my shame / And my shame / You know I believe it.”

Bono sometimes mentions music producer Quincy Jones’ observation about waiting for God to walk in the room while making music, letting him fill in the blanks. It’s true. Sometimes. On occasion, divine intervention occurs with albums and concerts. Thirty years ago, I sensed the raucous epiphany during “Joshua Tree.” It was sweet relief, most recently, to experience it all over again.