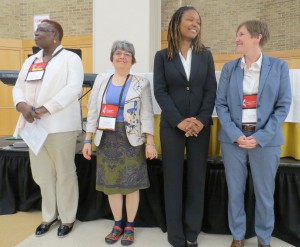 Four clergy candidates who came out as gay in an open letter to The United Methodist Church before the 2016 General Conference were among 28 people approved for ministry by the New York Conference. Photo by Joanne Utley, UMNS.

The Boards of Ordained Ministry of both the New York and Pacific Northwest Annual Conferences have announced they will not abide by recent rulings of The United Methodist Church’s Judicial Council, the denomination’s final arbiter of church law.

During the clergy session of the Iowa Annual Conference, the executive committee of the board of ordained ministry announced, “[It] would discern the call to ministry of all candidates without regard to race, ethnicity, gender, sexual orientation, marital status, or age and would not consider sexual orientation or gender identity to be sufficient reasons, on their own, to deny any candidate’s ability to live up to our United Methodist standards for fitness, readiness, and effectiveness in ministry.”

The decision, if adopted by the whole board, would make it the third conference in the U.S. to defy not only church law, but also two recent decisions of the Judicial Council upholding the church’s sexual ethics, teachings on marriage, and its ordination standards.

In 2016 both the New York and Pacific Northwest boards, along with five others, had voted to ignore portions of the Book of Discipline when it came to recommending openly gay candidates for ordained ministry. But this April, in two separate decisions (1343 and 1344), the Judicial Council ruled such evasions are unlawful.

In unprecedented moves, both boards said they would not abide by the Judicial Council’s decisions.

The Pacific Northwest Annual Conference Board of Ordained Ministry reaffirmed its position that it “will continue to give all candidates [including LGBTQ candidates] equal consideration [in the ordination process].”

Later that year, the New York Board recommended for commissioning and ordination clergy candidates who had come out as gay in an open letter to the UM Church just days before the 2016 General Conference. Bishop Jane Allen Middleton commissioned and ordained them at the 2016 New York Annual Conference.

The New York board’s action was immediately challenged, but Middleton ruled, “The Board of Ordained Ministry is not required to ‘ascertain’ whether a candidate meets the qualifications for candidacy and ordained ministry, including whether or not she or he is exhibiting ‘fidelity in marriage and celibacy in singleness’ or is a ‘self-avowed practicing homosexual.’”

The Judicial Council, at its April 2017 meeting, countermanded Middleton’s decision. The Council wrote, “[church law] prevents a Board of Ordained Ministry from ignoring [a clergy candidate’s] statements of self-disclosure about any action that violates any portion of church law as is the case for… persons who [self avow] their homosexuality.”

To date, Bishops Thomas Bickerton, Elaine Stanovsky, nor Laurie Haller, respectively the episcopal leaders in the New York, Pacific Northwest, and Iowa Annual Conferences, have responded to their boards’ decisions to defy the will of the denomination’s General Conference, Discipline, and now it’s highest judicial body.

“By now,” said the Rev. Rob Renfroe, president of Good News, “it is obvious progressives in the church are trying to accomplish by fiat what they have failed to accomplish through the church’s time honored processes established by General Conferences. And even worse, it is a very sad day when bishops fail to publicly call upon clergy serving on our boards of ordained ministry to abide by the rulings of our judiciary.”