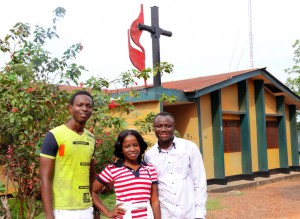 Photo by Phileas Jusu, UMNS
Johannes Baun (from left), Rose Saffa and Mohamed Nabieu, who were helped at the Child Rescue Center, are giving back the help they received by working at the center. The rescue center was founded to care for children impoverished by the 1991-2002 Sierra Leone civil war.

Mohamed Emmanuel Nabieu was 8 years old when his father was shot during a rebel attack and he was separated from his mother during the Sierra Leone civil war.

After living on the streets for four months, workers from the United Methodist Child Rescue Center found him and offered help. Now, as program director of the center, he works to pay back the help he received to other orphaned and abandoned children.

“My father was shot right in front of me. In the confusion of fleeing from my village… I lost contact with my mother. My mum went away in a different direction with a different group of people while I headed for Bo City,” Nabieu recalls of the turbulent times during the 1991-2002 war.

When the rescue center workers asked why he was sleeping on the streets, he was frightened.

“I attempted to explain but I was very nervous because I saw strange people in the company of white people. And I had never seen white people before,” he said. Eventually, the workers convinced him to follow them to the center at Mahei Boima Road.

More than a decade after the war, five staff members at the center are all alumni of the program.

To read the rest of the article, click here.