Q and A with Senate Chaplain Barry Black 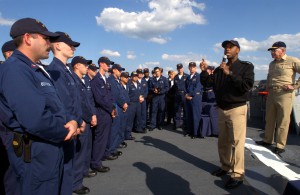 When Senate chaplain Barry Black finished his keynote address at the National Prayer Breakfast on February 2, the normally restrained crowd of religious leaders, politicians, and visiting dignitaries jumped to their feet and cheered wildly. Then President Trump took the podium and voiced his appreciation. “I don’t know, Chaplain, whether or not that’s an appointed position,” President Trump said. “I don’t even know if you’re a Democrat or if you’re a Republican, but I’m appointing you for another year.” We caught up with Black to talk about his new book, Nothing to Fear, pastoring both sides of the political aisle, and the importance of a leader’s “ethical congruence.”

Many described 2016 as a scary year. But the message of your book is that there’s nothing to fear. Can you unpack that?

Well, it’s a message that’s all through the Bible. First John 4 says, “There is no fear in love, for perfect love casteth out fear.” And 2 Timothy 1:7 says, “God has not given us a spirit of fear.” So whenever we as people of faith begin to experience the fear effect, we know immediately that it is not of God. We need to question and challenge it. And as we discover how perfect love enables us to cope with fear, then we ought to be able, as leaders, to share those coping strategies with others.

When a senator comes to you with fears and worries, how do you respond?

It’s very difficult to live in this world without some anxiety and fear. Our Lord said, “In this world you will have trouble” (John 16:33). In Job 14:1, it says, “Man that is born of a woman is of few days, full of trouble.” I’ve had a number of senators with health challenges, and they’re scared, as anyone would be. I’ve counseled men with a grandchild in some desperate strait or bad relationship. So it’s not just what happens in the chamber or in the committee room. In the course of their personal lives, they’re confronted with things that can terrify. When the doctor says, “We’ve done all we can,” or when the doctor gives you an expiration date, these are the realities that our lawmakers have to deal with in spite of all the other stuff they are juggling.

No matter how much money you have, no matter how much power and position you have, there are always things you can’t control. You can’t avoid every crisis. You can’t keep your children alive. Not in this crazy world. There are no guarantees, and that’s why I turn to the Psalms: “Call upon me in the day of trouble, and I will deliver you” (Psalm 50:15). So they come because of those kinds of fears, and it’s more common than many people would suspect.