NORCROSS, Ga.—The Mission Society has unveiled a new name that aims to further sharpen the focus and effectiveness of its wide-ranging work among some of the least-reached peoples around the world. 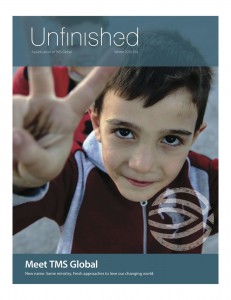 As TMS Global (www.tms-global.org), the interdenominational agency believes its training, church planting and mobilization efforts will be multiplied through a new name that looks to the future while holding onto its past.

The change takes into account strategy and security issues that have arisen in the 33 years since The Mission Society was founded. Globalization and technological advances have presented new opportunities and challenges in missions, while some parts of the world are more hostile to the gospel and closed to overt “missionary” activity.

TMS Global retains the initials of its old name, with the letters also reflecting the heart of the organization’s work—training missionaries and churches, mobilizing the body of Christ, and serving. Adding “global” underscores a commitment to ministry around the world, especially among the least reached.

“We know from the Bible that names are important to God,” said TMS Global President and CEO, the Rev. Max Wilkins. “He gave people new names at key moments in their lives, to define who they truly were and who he intended them to be.  We believe that in a similar way our name change is part of better preparing us for the future God has.”

TMS Global formally unveils its new identity in the latest issue of its magazine, Unfinished (www. tms-global.org/unfinished-magazine), which explores how the change highlights the five ways the organization is responding to contemporary global needs. They are a focus on the least-reached, capitalizing on the strengths of millennials, reaching populations on the move, training churches to impact cities and emphasizing spiritual formation.

The renaming is in line with a broader trend in missions. Other groups have changed their names in recent times: among them, Campus Crusade for Christ became CRU, while the U.S. Center for World Missions is now Frontier Ventures.

TMS Global is actually the third name for what began as The Mission Society for United Methodists in 1984. It later became The Mission Society, to reflect an ongoing commitment to becoming an interdenominational agency, while honoring its Wesleyan heritage and beliefs. Today the group’s 180 missionaries at work in more than 30 countries represent more than a dozen different denominations.

They are also diverse in their activities. TMS Global ministries include agricultural training, evangelism, church planting, discipleship, literacy, leadership development, medical care, relief and aid, teaching English as a second language and well drilling, among many others.

In becoming TMS Global, the Norcross, Ga.-headquartered organization has made a second name change. Its church outreach effort, helping local congregations get excited about and more engaged in world missions, is now called “Activate.” The new title aims to capture the dynamic nature of the training and mobilization program for local churches.

“We are excited about what is ahead for TMS Global,” said Wilkins. “We believe it is a new name for a new day—a new generation of cross-cultural witnesses who will share the good news of Jesus’ love incarnationally around the globe.”

More information is available at (www.tms-global.org).

TMS GLOBAL (www.tms-global.org) mobilizes and equips the body of Christ to share the good news of the gospel, with an emphasis on the least-reached peoples of the world. Workers are engaged in a wide range of dynamic, culturally-sensitive ministries, from training and leadership development to literacy, medical care and relief aid.