25 Years as Editor in Chief 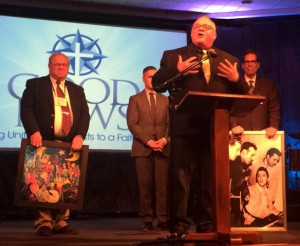 While gathering in Memphis, Tennessee, the Good News Board of Directors celebrated the 25th anniversary of Mr. Steve Beard as columnist and editor in chief of Good News – at the helm for more than 150 issues of the independent United Methodist magazine.

In commenting on the anniversary, the Rev. Walter Fenton, a colleague at Good News, noted that Beard’s wide-ranging journalistic interests swung from John Wesley to Bono, Johnny Cash, and Mahalia Jackson – and passionately focused on the plight of martyrs and persecuted believers around the globe and the marginalized in our own society.

“You’re always wondering about how we as a church can find ways to be more compassionate, gracious, and just simply kind and decent to the lost and lonely in this world that too many of us hardly even notice,” concluded Fenton.

The board of directors presented Beard with a framed picture of the “Million Dollar Quartet” – Elvis Presley, Johnny Cash, Carl Perkins, and Jerry Lewis in the studio of Sun Records in Memphis, as well as original art from contemporary folk artist Chris Taylor.

Prior to his retirement, the Rev. Dr. James V. Heidinger II, president emeritus of Good News, worked with Beard for 18 years. “I remember a great picture on one of Steve’s office walls of him in a tuxedo, talking with the late William F. Buckley Jr. at a Washington D.C. reception,” recalled Heidinger. “It always reminded me of the cultural adjustment Steve had to make in coming to our former offices in Wilmore, Kentucky.”

“But how fortunate for all of us that Steve did come! And that he stayed,” continued Heidinger. “He worked himself ragged giving Good News a first-rate publication, issue after issue. It has been your calling for quarter of a century, and you have done it splendidly!”

“You are gifted professional, a skilled craftsman, and a person of great integrity,” Heidinger concluded. “You have amazingly good instincts about how we can and should relate to a church struggling for its soul…. Congratulations on this very significant milestone.”