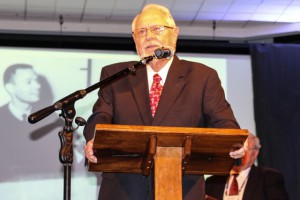 At its most recent meeting, the Good News Board of Directors bestowed the Ed Robb Jr. United Methodist Renewal Award on the Rev. Dr. Maxie Dunnam, pastor, author, seminary president, and former world editor of The Upper Room.

The award is presented to a person that has demonstrated dedication to the renewal of The United Methodist Church. It is named after the late Rev. Edmund Robb Jr., a United Methodist evangelist and author who served as a Good News director and chairman of the board. Robb was known widely for his tireless efforts to renew the UM Church. He is most widely remembered for joining with Dr. Albert Outler to establish A Foundation for Theological Education (AFTE), a ministry that continues to have a lasting impact on the future direction of the church.

Dunnam was presented with the award on November 3 during Good News’ President’s Dinner, hosted by the Rev. Rob Renfroe, current president and publisher. More than one hundred friends and supporters of Good News turned out for the event at Christ United Methodist Church in Memphis, Tennessee.

Dr. Dunnam, pastor emeritus at Christ Church, was recognized for his work as world editor of The Upper Room, leader of The Academy of Spiritual Formation and what would become The Walk to Emmaus, author of over 40 books – including The Workbook of Living Prayer, which has sold over one million copies, and president of Asbury Theological Seminary. Christ Church in Memphis is the location of the newest campus outpost of Asbury Seminary, in addition to Wilmore, Kentucky and Orlando, Florida.

In his presentation, Renfroe accentuated Dunnam’s commitment to civil rights and education for underprivileged children. “As a young pastor in the early 60s, he was one of the original signers of a document called ‘Born of Conviction.’ In the heart of a bigoted, segregated south, he and 27 others created and had published the document that made it clear that the Gospel and the church were for all people because Jesus died for all and Jesus is the Lord of the church,” said Renfroe. “A son of the south, Dr. Dunnam refused to be a child of his times, and pointed the people to the timeless biblical truth that in Christ we, all of us, are brothers and sisters.”

The award presentation also celebrated his influence as a five-time delegate to General Conference and his instrumental roles in helping create both the Confessing Movement and the Wesleyan Covenant Association. “Maxie, by nature, is a lover with a heart of grace. But, there is a commitment to the truth of the Gospel that has propelled him into the fray, at times reluctantly,” said Renfroe. “And for who he is and for all he has done, we honor him.”