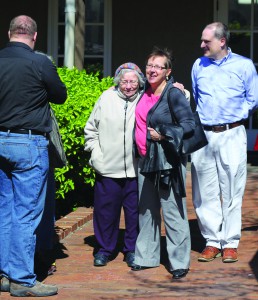 The Rev. Cynthia Meyer (second from right) gets a hug and well wishes from supporters. Photo by Todd Seifert, Great Plains Conference.

A complaint against the Rev. Cynthia Meyer, a lesbian pastor in Kansas, has ended with her taking an involuntary leave of absence at least until the conclusion of the next General Conference. The resolution, announced August 3, averts a church trial.

Under the agreement, Meyer will go on leave starting September 1 and no longer serve as pastor of Edgerton (Kansas) United Methodist Church. She cannot receive an appointment or perform the duties of a United Methodist elder, such as administering the sacraments. In short, she will be out of a job.

However, a church or other United Methodist entity can hire her for functions equivalent to that of a layperson. She also will receive $37,000 — about a year’s pay in her current appointment.

She officially will retain her clergy credentials at least until 90 days following the next General Conference, the denomination’s top lawmaking assembly. Depending on what the legislative body does, she may:

• take advantage of another provision the body approves

Meyer faced a charge that she is a “self-avowed practicing” gay clergy member, a violation of the Book of Discipline, the church’s governing document.

The agreement came August 1 after more than 12 hours of closed-door discussions among Meyer, Great Plains Area Bishop Scott Jones, four counsels involved in the case, and two facilitators from the denomination’s JustPeace Center for Mediation and Conflict Transformation.

The resolution also comes as United Methodist bishops are preparing to appoint a commission, charged with reviewing the denomination’s policies related to lesbian, gay, bisexual, transgender, and queer or questioning individuals.

Thoughts on resolution. Jones, whose former area encompasses the states of Kansas and Nebraska, is a member of the Council of Bishops executive committee that is planning the Commission on a Way Forward. He will became the bishop of the Houston Area, starting September 1.

“The agreement we reached upholds the Book of Discipline and yet recognizes that the larger denomination is in a time of discernment about a way forward,” Jones told United Methodist News Service. “So this agreement recognizes that accountability was necessary and yet holds open possibilities for whatever the general church is going to decide.”

Meyer said in a statement that she recognizes the agreement as a complaint resolution but not a just response. Nevertheless, she said she moves ahead in hope.

“I hope that The United Methodist Church, through a fully representative, inclusive commission, then a focused General Conference, will intentionally, prayerfully remove all discriminatory language and practice from its Book of Discipline,” Meyer said in a statement.

How case came to be. Meyer, an ordained pastor for 25 years, came out during her January 3 sermon to the Edgerton congregation. She told the church that she was choosing to serve “with full authenticity, as my genuine self, a woman who loves and shares my life with another woman.” In addition to serving other churches in Kansas, Meyer also spent 12 years as dean of students at United Methodist Candler School of Theology at Emory University in Atlanta.

A complaint soon followed her sermon, and she knew her clergy credentials could be at risk. Since 1972, the Book of Discipline has proclaimed all individuals are of sacred worth but the practice of homosexuality is “incompatible with Christian teaching.” The book lists officiating at same-sex unions and being a “self-avowed practicing” gay clergy member as chargeable offenses under church law.

Meyer moved a step closer to a church trial in April after she and Jones initially failed to agree on a resolution to the complaint. However, the Book of Discipline says a trial should be regarded as “an expedient of last resort.” Under church law, a resolution without trial remains an option throughout the complaint process.

The Great Plains Conference meeting June 1-4 approved an “aspirational resolution” that urged “a just resolution” in the case. Jones said he took that resolution seriously. Meyer told UMNS that she is doubtful that going forward with a trial “would have provided justice in the denomination.”

“Given the likelihood of a negative and quite harsh end to the trial, I did not want an annual conference or the church as a whole to go through the process,” she said.