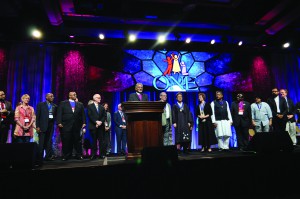 The brilliance of the World Methodist Conference is still shifting through my mind; light through a suncatcher hanging on a window.

The days in Houston were color, sound, faces, laughter, weeping, worship, intensity, frustration, revelation. I met people and forgot names. I met people and remembered names. I saw textiles woven with Methodist patterns, saris shimmering, archbishop caps velvety and plush; music, art, science, all pinned up by prayer and thanksgiving and yearning and the plastic mechanics of translation headsets. There were laughing reunions of old friends, businesslike introductions, notes hastily scribbled while listening to profound speaker after profound speaker, paper business cards exchanged. Houston humidity was hanging heavy on the air, the heaviness clouding the jetlagged faces of international delegates. Energy emitted from others in waves strong enough they could’ve charged a few of the always-dying smartphones of delegates and participants.

Parsing out such a gathering takes months.

A couple of undercurrents of thought emerged, though. They bubbled up in chats, they surfaced in workshops and seminars, they popped up in a plenary or two. One current was simple joyous celebration in the very bringing together of such a globally diverse gathering. Attendees were glad to be present with so many other people from countries most have never been to. The parade of banners in Opening Worship illustrated just how far the Wesley brothers’ influence traveled. The Methodist Church of Tonga? Fiji? Southern Africa? Kyrgyzstan? Italy? And then there were Nazarenes, United Methodists, A.M.E. Zions, Wesleyans, C.M.E.s, A.M.E.s, Free Methodists, all branching out into the world from the United States. Methodism has been present in many nations around the world for over a century. At one point, in fact, early in Methodist days, a well-meaning evangelist sailed to the Caribbean only to find that Methodism was already there, thanks to the work of an earnest layperson.

Another current that emerged was the nature of our continued engagement with our world. And it was here that some different perspectives emerged. Both views fully affirmed the value of social justice and works of mercy; the crux was revealed in how they went about it.

In one workshop, handouts were distributed encouraging ministers not to ever try to evangelize a person from another faith (though “evangelize” was not defined). It recommended not only learning from another person’s faith (a laudable effort in itself), but rather accepting that no religion has a unique truth claim, and therefore it is inappropriate to suggest that yours does.

In the same workshop, a Bishop with a great deal of experience partnering with Muslim leaders to fight common diseases expressed a sense of frustration at this approach, asserting that his Muslim friends would not take him seriously if he was apologetic for his faith, and that he was comfortable working in interreligious partnerships while also being comfortable in his own skin as a Christian.

In conversations, I noted a slight change in demeanor occasionally when I explained my job title: Associate Director of World Methodist Evangelism. There was hesitancy while I briefly shared our vision of faith sharing, and a bit of polite social distance when I described the value of approaching faith sharing through word, deed, and sign. In other words, providing hurricane relief or microloans or wells for clean water is wonderful; doing it in the name of Christ, along with proclamation and prayer, could become aggressive, intolerant, and disrespectful.

And yet there was another subtext also potentially lacking a robust appreciation of the redemption of all Creation: that anything not accompanied by explicit sharing of the message of Christ is wasted (a line of thinking woefully lacking in a full theology of prevenient grace; Jesus healed nine lepers who walked away healthy yet lacking spiritual insight, but he healed them nonetheless, and that was a good thing).

For a bit of clarity, let’s sketch out the Christian theology behind this discussion.

General revelation can refer to awareness of God through reason or nature, accessible to anyone through natural means.

Now if you don’t like that distinction or those definitions, you can take it up with St. Thomas Aquinas. For our purposes, they’re helpful.

If you embrace the postmodern assumption that nothing can be known for certain, then you wrestle with the idea of special or specific or supernatural revelation. After all, it would be arrogant to claim one person has special revelation in that context. And extremists (in the Middle East) who kill civilians by blowing themselves up or who (in North America) picket military funerals in protest of homosexuality claim special revelation, and we don’t want to be like them. There is an extraordinary deeply felt lack of optimism when it comes to the competing claims of world religions.

I am not a Methodist so that I can be a better humanitarian. I appreciate humanitarians; they do a lot of good in the world, and that is a great thing. There are many organizations I could join to be a good humanitarian, though, and they have a lot less parliamentary law.

And I am not a Methodist out of sentimentality for my upbringing in Wesleyan Methodist theology. I appreciate heritage; it guides us in our identity and values. There are many organizations I could join to appreciate heritage, though, and they have a lot less parliamentary law.

Wesleyan Methodism is a way for me to be a Christian. If I did not believe in the specific revelation of the nature of God through Jesus Christ, I would not be a Christian. I wouldn’t waste my time with the parliamentary law of denominations or fellowships or conferences. If I just wanted to make the world a better place, I would join Greenpeace or the Red Cross or the Peace Corps or the U.N. (though that last one would reburden me with parliamentary law). I want the world to be a better place and I’m thankful for those organizations. They do a lot of great, worthwhile work.

But I am a Christian who wants the world to be a better place. And I value Wesleyan Methodism as a way to be a Christian. And if I follow Christ – imperfectly, believing more fully some days than others – if I choose to follow Christ, then that shapes how I interact with the world. And I will talk about Jesus because without Jesus I’m a jerk. And when I see a great initiative about wells for villages I will think of Jesus sitting by a well talking to a woman who, in my town, would be the woman with the smeared mascara and cheap dye job still wearing yesterday’s clothes. And when people ask about my Christ medallion, I smile. I’ve eaten Saltines with a sip of Welch’s, I’ve eaten Hawaiian bread with a sip of grape juice, I’ve dissolved a wafer on my tongue with a sip of port wine, and I’ve tasted in all of them the Body of Christ, the Blood of Christ.

I’ve eaten with Muslims and agnostics, with atheists and Wiccans, with Buddhists and Baptists. I enjoy breaking bread with people who are different than I am. I don’t want any of them to go hungry. I want to share what I have with them, whether they ever believe what I believe or not.

But I’m also comfortable with my vocational call to proclaim Jesus Christ, and him crucified – or as I told my first congregation, “if I didn’t believe this, I wouldn’t waste your time; if I ever stop believing, I’ll stop preaching.”

Humanitarian work is valuable, deeply so. Just The Bill and Melinda Gates Foundation alone illustrates that. One could say it is a means of general revelation. (Although I should note that Melinda Gates is open about her Catholic faith.) And if someone’s deep skepticism about goodness in the world is lessened because I hold a door open for her, all the better: perhaps that will soften her heart to consider whether there might be a benevolent Creator.

The work of the church, however – the work of the Body of Christ, the Church Universal – always goes beyond general revelation. It proclaims Christ, even as newly sainted Mother Teresa did when she taught her sisters that to touch a smelling, diseased, infected, helpless man or woman was to touch Jesus. Witness requires sacrifice; it requires self-denial. Even Jesus prayed, “Father – not this. Not this…” And so while, as good Wesleyan Methodists, we seek to become more and more Christlike, perhaps the Spirit makes us so by allowing us to treat others – no matter how repulsive we personally may find them – as if they were Jesus in the flesh.

It is the only way to keep hate from seeping into my heart: hate towards groups like Westboro; hate towards racists and rapists; hate towards bigots and big-mouths; hate towards bullies and exploiters. I have found that, Jesus’ “goodness, like a [leash], binds my wandering heart to thee.”

Christ has died – to make all things new, as we are anointed to carry out alongside him through the Holy Spirit.

Christ is risen – conquering the ugliest realities of the universe, a sign that death will die, as we are anointed to proclaim through the Holy Spirit as we bring life to dying people and places.

Christ will come again – breathing the promise of God’s Kingdom fully realized, a way of being where there is no more crying, no more pain, and we share this promise when we work to relieve suffering, as we are anointed to proclaim the healing of the nations through the Holy Spirit.

Yes, we speak of Jesus, because we cannot be silent. In our work, in our prayers, our hearts’ cry is the Son of God, Emmanuel, God With Us, Bright and Morning Star. It is through the light of Christ we see, and by his wounds we are healed. It is his Body we celebrate, the Word Made Flesh, and it is on this mystery we meditate while volunteering at soup kitchens or planting community gardens or shoveling a widow’s driveway or paying the utility bills for a laid-off neighbor or structuring a microloan process for former sex workers.

Won’t you walk with us?

Elizabeth Glass Turner is the Associate Director for Community and Creative Development at World Methodist Evangelism. She is also the editor of www.wesleyanaccent.com. Reprinted by permission of Wesleyanaccent.com.